← more from
Bad Elephant Music
Get fresh music recommendations delivered to your inbox every Friday.
We've updated our Terms of Use. You can review the changes here. 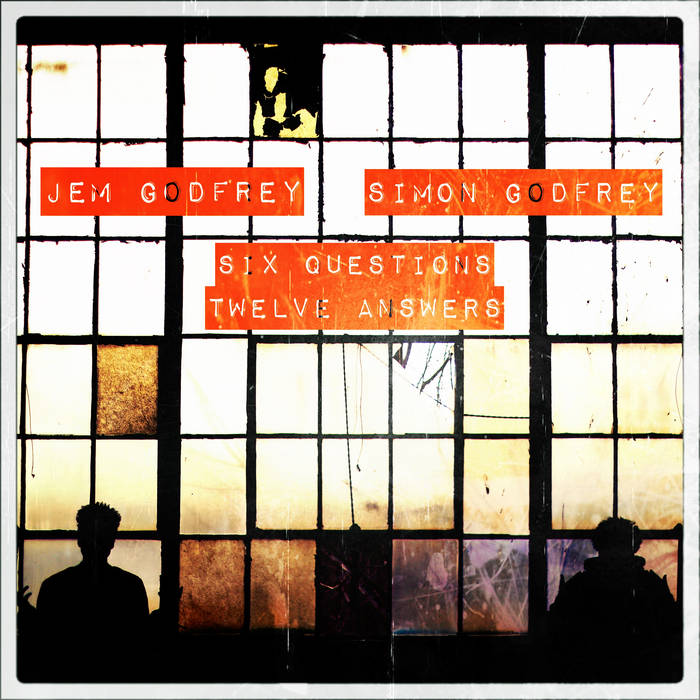 Spamystyle Because I interviewed both of these dudes. And I friggin' love their music.

As some of you know, there has been an ongoing and widely publicised fundraising drive for legendary Cardiacs singer/guitarist/producer, Tim Smith, who had a massive heart attack back in 2008 and now suffers from condition called dystonia. Mentally the bloke is as sharp as ever but his ability to move and speak however, is minimal. My brother Jem Godfrey and I have been huge Cardiacs fans since the early 1980s and we very much wanted like to contribute to his cause by releasing (through Bad Elephant Music) something a bit special in the form of a previously unreleased collaborative project between Jem and myself;

I say special because out of all the recording projects I have been involved with over the years, Six Questions, Twelve Answers has an incredibly long and very unique gestation period which begins way back in the summer of 1999. Back then Jem was just making a name for himself as a production gun for hire and I had found a modest amount of success riding the crest of a new wave of acoustic artists and bands in the UK.

Somehow Jem and I came up with the idea of writing half a dozen instrumental tracks separately, each based upon six absurdly short questions; Why, What, How, Who, Where and When? Just to see if they might all fit together as an album. It was the musical equivalent of the child’s game where you draw a head on a piece of paper, fold it over, then another person draws the body, etc. We wanted to make something interesting in the hope of confounding our own expectations because as any artist worth their salt will tell you; that’s where the fun stuff is.

We loved the results but as the months and years went on and our respective careers began to pick up pace, the recordings we’d made were slowly forgotten and began to gather dust. The issue was compounded when in 2010, a back up hard drive of mine containing the original recordings, crashed fatally and all the session files were permanently lost. On the surface both Jem and I shrugged and chalked it up to fate telling us that it was never meant to be but subconsciously, I was personally disappointed. It had been a common scrapbook of ideas, from two brothers who would go on to find very different points of entry into the musical landscape.

Fast forward to 2015 and I had moved from the UK to live and work full time in as a music producer in Philadelphia, USA. My possessions arrived nine months later via a cargo container and it took me a number of weeks to sort through the mountain of boxes. Just before my departure from London, I had asked my long term co-writer Rob Ramsay to burn off a copy of everything of mine that I had sent to him over our many years of working together, just in case my own studio hard drives didn’t survive the sea voyage. One box in particular contained a CD marked with a simple ‘6’. I immediately rushed down to the studio, flung it into the CD player of my iMac. There staring back at me, was a copy of Six Questions, Twelve Answers.

It was like finding a photo of a long forgotten friend. I hadn’t listen to the album in over a decade and while the instrumentation and production were thinner than I remembered, the tunes themselves were still compelling. In the light of my discovery and just as an idle side project between studio sessions, I began to slowly go through the individual tracks to remix and clean up the audio. It took a couple of years of gentle tinkering in my spare time but it was like discovering an aging classic car in a barn and restoring it to former glory for no other reason than you could see the beauty beneath all the dirt and rust.

So for Tim, were giving you one of the most personal and storied collections of instrumental music that we’ve ever had the pleasure to be involved with. The brothers Godfrey hope you enjoy it.

For Tim; heaven born and ever bright.